Lane and Frankham was commissioned by Gallions Housing Association to undertake a 3D laser scan survey of two areas of their Thamesmead site which encompassed 19 twelve-story blocks of flats. The 3D laser scan survey was to cover all buildings, garage blocks, walkways and bridges, and to also include key topographical features.

The survey of the 2.5 sq km area was completed within three weeks using FCG’s Leica ScanStation C10, which is capable of capturing survey information at a rate of 50,000 points per second, to millimetre accuracy.

3D laser scanning was chosen for this project for two reasons:

Initially the completed data set, containing over 2 billion highly accurate survey points, was used to generate a series of computer animated ‘walkthroughs’ designed to form part of the consultancy with residents. These showed the existing ‘as-built’ site and after some editing of the data the proposed regeneration allowing the residents to experience and give feedback prior to any works commencing.

Subsequently, as part of the phased regeneration works, detailed topographical surveys and elevations of the existing tower blocks were required by the clients architects. All of which were extracted from the single data set generated from laser scanning. This ensures accuracy and consistency at all stages of the CAD process, and negated costly returns to site to collect additional data.

We were pleased to be involved in this regeneration project, and with the use of modern technology to aid this process we feel that this will eventually add value to life in the community. 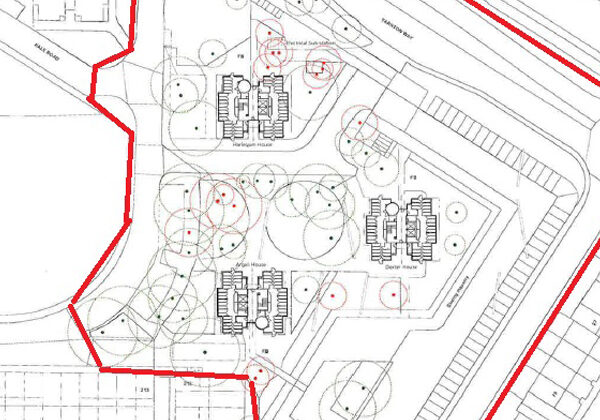